After months of review and deliberation, South Carolina Senate President Harvey Peeler has introduced legislation authorizing Governor McMaster to sell Santee Cooper on Wednesday. A huge shift from the previous hesitation the Senate once held.

In his statement, Senator Peeler wrote, “I believe the time has come to sell Santee Cooper.” A move that Governor McMaster has been pushing for since late 2017 after the state-owned utility company abandoned their failed V.C. Summer Nuclear Project and racked up over $8 billion in debt in conjunction with SCE&G.

In recent months, ICF International completed their evaluation of multiple bids to purchase Santee Cooper, including three which would purchase the entire utility and absolve the debt to alleviate direct serve and cooperative customers from paying increased utility rates.

After hearing testimony yesterday from key Santee Cooper executives who were unable to provide valid answers to several questions including the future of utility rates, Senator Peeler filed a joint resolution that authorizes the sale, stating, “Their leadership is in crisis. They are crippled by debt. It is clear to me that Santee Cooper cannot see their own way that works for their ratepayers and the taxpayers of our state.” 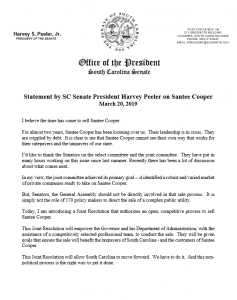 This resolution warrants Governor McMaster and his administration to conduct the sale with assistance from a selected professional team. Senator Peeler also stated that this team “will be given goals that ensure the sale will benefit the taxpayers of South Carolina – and the customers of Santee Cooper.”

While we know several major power companies have expressed interest in Santee Cooper, the bids to purchase still remain anonymous, but Senator Peeler’s resolution is a step forward for Santee Cooper customers and South Carolina taxpayers.